While on a Tuple call, you can learn more about the connection between you and the other call participants. Clicking on the network health icon beside your Avatar image will unfurl diagnostics: 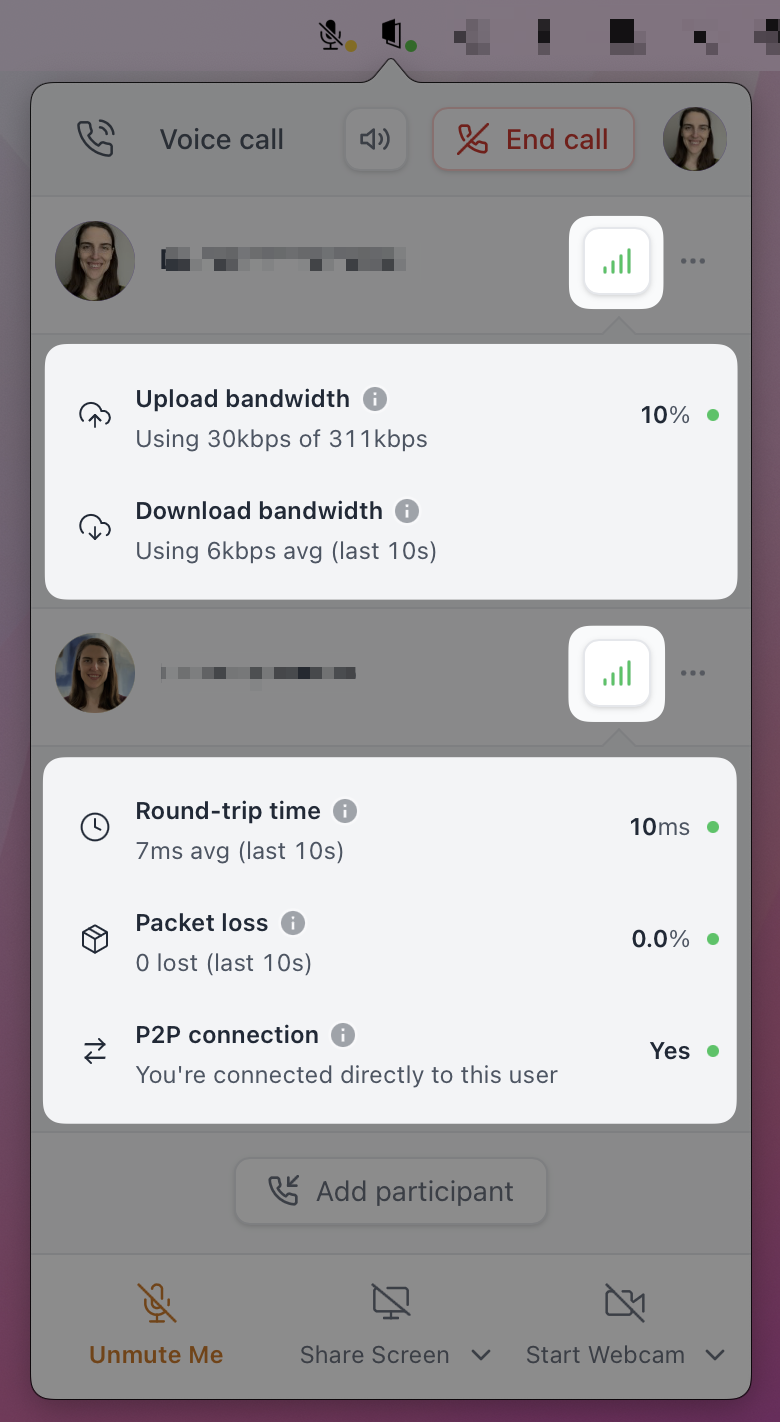 If you're noticing call degradation on your Tuple call, these metrics can point to steps to improve the call quality.

Calls are dependent upon the network bandwidth available to Tuple. To prevent network congestion, Tuple has a bandwidth estimation algorithm that determines the amount of bandwidth available for each peer throughout the call. This algorithm is particularly sensitive to perceived packet loss, and higher round-trip times between peers, and will set a much lower cap if it detects either.

Upload bandwidth - This is your amount of send bandwidth budgeted by our bandwidth estimation algorithm. It caps out at 10mbps, and will be lower (~100-500kbps) if you're sharing audio only.

This estimation can be improved by taking steps to improve your network capacity such as:

If you're on a low quality network connection, and using 100 percent of your Upload bandwidth, you can take the following steps to reduce the amount of bandwidth used:

If you're participating in a screen sharing call, and you believe the bandwidth estimator is not accurately estimating the available bandwidth for you or your peers, you can reset the estimator.

If you're viewing a screen, the reset button will be available to you in your pair's diagnostics: 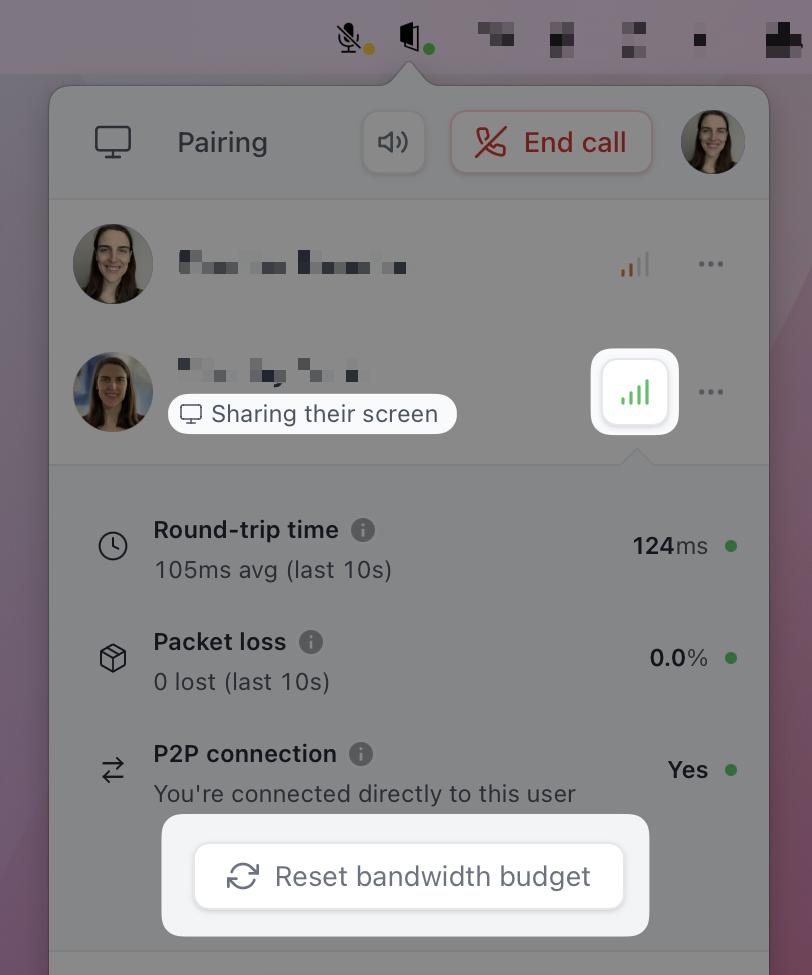 If you're sharing your screen, the button will be available in your diagnostics: 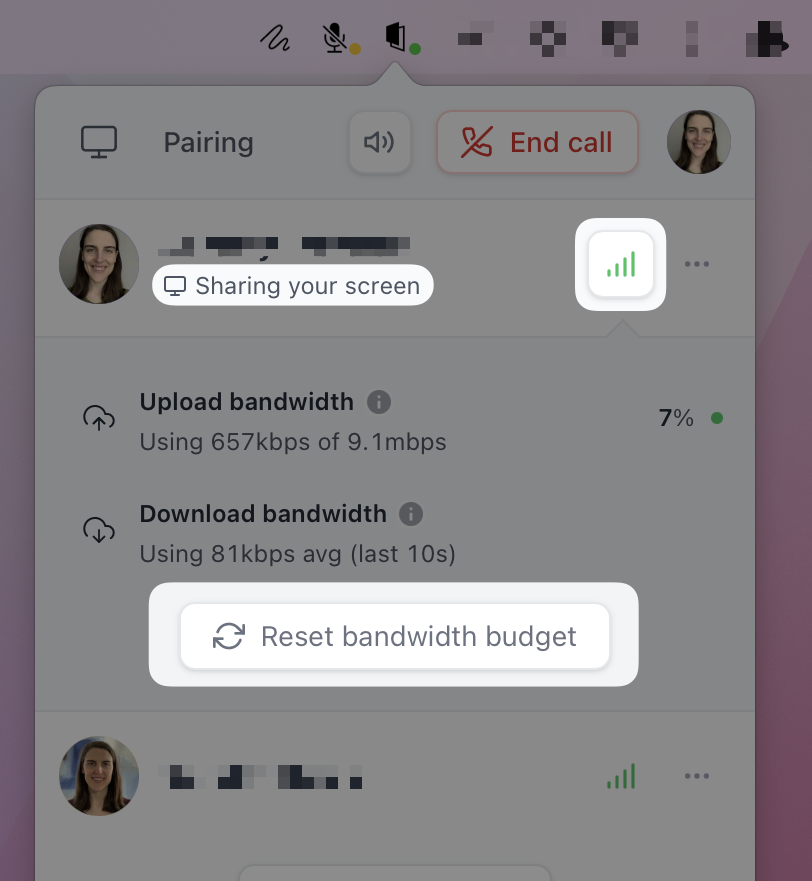 This diagnostic is only shown to you if Tuple detects that you are on a VPN.

Given Tuple calls are peer-to-peer connections (as opposed to an intermediate server like Zoom), quality can be affected by how the call was routed through the internet. VPNs or particularly strict firewalls can cause calls to be routed very inefficiently depending on the settings.

If you notice call degradation while using a VPN, we suggest trying a call off of the VPN to see if call quality improves. If you see an improvement, we suggest reaching out to whomever configures the VPN to adjust the settings, or not using the VPN while you are on calls. Read more about troubleshooting your VPN setup here.

This metric is the amount of time it takes for a packet to get from one user to another and back. As Tuple calls are peer-to-peer connections (and do not go through an intermediate server), this metric reflects the travel time for the connection between you and the other call participants. If your call has multiple participants, you will see separate round-trip times for the time it takes a packet to reach each individual call participant and then return to you.

Generally, unless you are doing a very long distance call (Sydney, Australia to NYC, USA for example) round-trip times should be 100ms or less. Higher round-trip times are usually caused by one of the following:

Packet loss happens when packets of data traveling across a network connection fail to reach their destination. In most cases, it's caused by errors in data transmission across WiFi networks (see  Use A Wired Ethernet connection below), or by network congestion, but can also be caused by errors in data transmission at the ISP level. Packet loss numbers can often be improved by restarting your router, and moving closer to it. 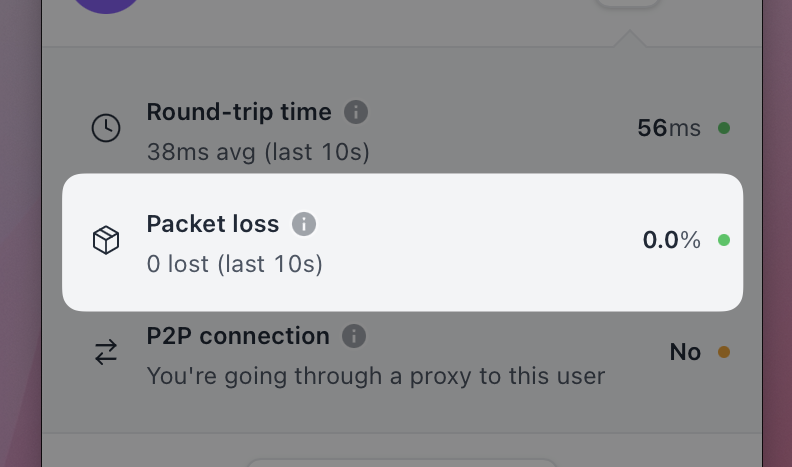 Packet loss values are shown for each other peer on the call. These values are calculated by a true-up of how many packets this specific peer's client sent to you, versus how many you have actually received from the peer's client.

Packets can be lost anywhere along the connection between you and your peer, and the fault can be on either end. To determine where you're losing packets, you can perform a ping test:

Since Tuple calls are peer-to peer connections, you can `traceroute` your pair's IP address in terminal to check for latency at each hop between you and your peer:

If you see response times greater that 100ms for a hop, that can indicate where latency/congestion is being introduced into the connection, and may be where packets are being lost.

You can also use `ping` to discover where you're losing packets. While your Tuple connection is running:

If this still doesn't uncover a particular place where packets are being dropped, you can get some more detailed diagnostics by using: `netstat -s` which will show you a packet loss breakdown by packet type.

Once you have identified where packets are being lost, you can take steps to mitigate loss. You may need to move closer to your router, re-configure VPN or firewall settings, or even call your ISP and tell them that one of their servers is dropping packets — they can re-route your connection through a more stable path.

Use a wired Ethernet connection

Using a wired Ethernet connection reduces packet loss significantly which can really improve Tuple's performance. WiFi setups can be quite noisy and introduce a lot of local packet loss. Tuple has a congestion control algorithm that is heavily based on packet loss which can decrease the performance.

If you can't use an ethernet connection, make sure you are as close as possible to the WiFi access point. If you're nearby other WiFi networks, you might be competing on the same channel which can lead to dropped packets. Depending on your router software, you may be able to manually change to a different channel which might not be as crowded.

When it's not possible to obtain a peer-to-peer connection through local or public networks, Tuple uses Twilio to route media data through TURN servers. 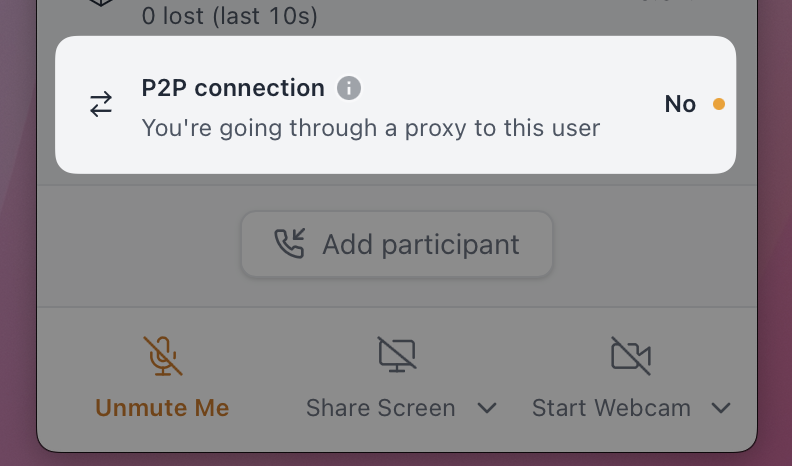 If you see a "No" appear here, your connection is not peer-to-peer.

Did this answer your question? Thanks for the feedback There was a problem submitting your feedback. Please try again later.